"Grief is the price we pay for love"

I had my lovely 18 year old Jack out to sleep two days before Christmas.  I was devastated more so because he was the last of my family.  I feel he is now with my Mother and husband who adored Jack.  I could not eat or sleep.  However I am so pleased he reached 18 and was ok till a few days before.   I now remember what a great life he had apart from yearly injections only one visit to vet for a few teeth to be removed aged 14 .  I have his ashes here and pat the box first thing and last thing as I used to Jack.  He was so well loved by friends too.  With their advice and being so unhappy and lonely I have just got a very shy adult Chihuahua and I am telling Jack to help me to get her to settle.  She certainly could smell his scent when she arrived despite the weeks that have passed.  If only our dogs could live even longer though it has helped knowing what a long and happy life Jack had and I am remembering our good times.  I found having a big photo of him aged 17 in living room where his basket was helped and my new pal sits beside it when sun shines in window. 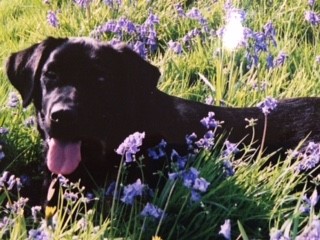 I hope I can offer a unique view of the passing of our faithful companions as I am a registered veterinary nurse and a dog owner, still mourning the loss of my beloved black Labrador some 6yrs ago. Benson was my shadow. I rescued him (literally, I nearly ran him over one night!) he was blind when I found him, and suffered all manner of weird and wonderful ailments and diseases over the 5yrs I had him. Obviously I loved him all the more, got up every night when he needed to go out due to his kidney disease, my husband and I camped out downstairs with him when he had spinal pain and couldn't climb the stairs to bed. Eventually all the medical treatment and nursing could not halt the advances of his arthritis and failing kidneys and the time came to let him go. I had experience of the process of euthanasia obviously from my line of work and had seen many unfortunate dogs who had been left lingering in my opinion too long before coming to the vet to ease their suffering. But I was struggling to decide on the when the right time would be, he had good days and bad days, would I be robbing him of good days to come? A piece of good advice I was given was "better a week too early than a day too late" and it really helped me feel less guilty about things. I've always told my clients "they'll let you know when they're ready to go, you just have to be listening", this moment was very obvious when it came to me and Benson. I'd let him out in the front garden to have a sniff about in the sun. He sat down heavily and looked at me with such a kind look on his face and sighed gently. That gesture told me "I'll keep going for you if you need me to, but I'm ready to go now" of course I cried buckets and spoke to a vet friend to come round to the house the next day. I had already arranged with a private pet only crematorium to cremate him and my husband and I drove him there together once he was gone. His ashes rest under an apple tree planted for him in the garden. The spring bulbs are just starting to flower there now.

That is my story with Benson but perhaps I can also offer advice for other people approaching the inevitable end of days? As a veterinary nurse I can appreciate the situation from both sides and there are some simple things that can make such a difference. If possible, give the practice as much notice as possible so that they can reserve plenty of time for your appointment, we really don't like to rush such a delicate visit. If you would like a home visit, again, try to pre-arrange this with your vet. Sometimes it is not possible to visit the home for euthanasia if the vets are tied up and cannot leave the practice or are dealing with emergencies for example. Likewise, look into options of dealing with the body afterwards, burial at home, standard cremation, individual cremation etc. this can help with starting to come to terms with things. It can help to have a specific nurse to speak to at the vet practice who can be on hand to guide the family through the process, someone who you can speak with on the phone and provide reassurance. If you are finding it difficult to know when to make the final decision, which can be really hard in long-term deteriorating conditions, it can help to draw up a list of your dogs favourites things in life e.g. chasing squirrels, walks in the woods, chewing a bone, playing with the children. Then go through and see how many of these things your dog can manage now. Do they have quality of life? Are they in pain? Can this be managed? Pet bereavement services are available, sometimes at the practice, or the blue cross have a dedicated careline.

Sally W
About the death of a dog...

About 40 years ago, after my dachshund then aged 14 + got a painful condition that needed a big op to put it right, I went home & told my 3 sons – then aged between 8 & 13 – that it wasn't fair to put the dog through a big operation at her age and they had the following 6 weeks for a special ‘goodbye’ time. (They say they dont recall me saying that, but I did.) And at the end of that period, I took her to the PDSA and had her put to sleep. Of course, I was very sad but, as the only parent, I had to look after my children.

My next dog – a wonderfully intelligent toy-poodle cross that I bought from Battersea DH– got water on the lungs and although it was treated she never got better...  She died at the age of 14 & a half, on her bed by my feet.     I was so upset that I rang a friend to ask if she could come round, and my gardener if he could do me a favour & come the next day to dig a hole to bury her ,, and he did.  After that had been done,  I lit a 24-hr candle for my dog saying a prayer at the same time, every day for a week.

Then a couple of weeks later, my 102yr old mother died & I was glad for her as she had been saying for the previous 18mths that she wanted to go to be with Dad.  So though I was sad about my mother, I was able to cry & mourn my lovely dog, while also mourning Mum.

​I forgot to say, Steve, that there was about 17years between my daschsi and getting my poodle cross, as I had to go out to work, and I wont leave a dog by itself all day, every day, as that is cruel.
​
So my lovely poodle cross died,,,, and then as I said Mum did too, and there was so much to do afterwards, that I didnt immediately start thinking about getting another companion....   Some years later, I carved her name into a small piece of stone which sits by her grave..

When I went back to Battersea later that same year – the cheek of it - they told me that at 70, I was too old to have one of their puppies and offered me a 10-yr old. So I told them it was their loss as I would go to a breeder – which I did.

I found a breeder – via <preloved.com> which a policeman had told me about – and she lived out in the wilds of Norfolk... So, as in the October I had sculptures to take to Holt for a show, I went to visit the breeder on the way back.   The breeder gave me this tiny 3week old black pure-bred toy poodle puppy to hold and in less than 10minutes she was lying sound asleep on my chest. The breeder was so surprised and said that she had never seen a dog settle quite that fast before...  So, I paid a deposit,  the tiny pup was mine and I collected her 3 weeks later at the age of 6weeks.
True, it was a bit early, but I had to go back to Holt that week and I went to fetch her on my way back. AS she was too tiny for a harnesa, I’d got a cage & until she fell asleep she screamed at me for a lot of the way home..  That was just over 8years ago, and for her first few weeks, while she could still fit in there, whenever I went out I used to carry her around with me – except when I was driving & she had to go in the cage – inside my zip-up fleece jacket next to my heart.  So she really bonded to me and we are very happy together.
The only drawback is that she is certain she is human and loves people, but doesnt like any other dog and is mostly afraid of all them.  It began at her first training classes when she was much smaller than most of the other puppies and has gone on from there. So we always walk by ourselves.

Much to her disgust, I make her sleep in the kitchen but that is mainly because she is quieter there, and I cant hear her snore – which is very loud for such a small person. Plus, if she sleeps on the landing outside my room, there is the frequent thunder of small feet running down the stairs to investigate every noise, in between trying to slither silently into my room to be with me..
In here, when I am on the computer, she sits on the chair behind me as she learned during that very cold winter 2 or 3 years ago, that it was far warmer to be squashed in behind me than on the floor .... I didnt object as she kept My back warm too.    And when we are downstairs, my armchair is not just for me... My little madam squeezes into the 3-inch space between me and the arm.

Will I get another companion when she goes, probably in about 6 yrs time going by the ages of my previous dogs?  I dont know. It really depends upon how fit & well I am... Perhaps if I can find what my American friend calls a ‘teacup’sized poodle,  as it will be even smaller than this one.